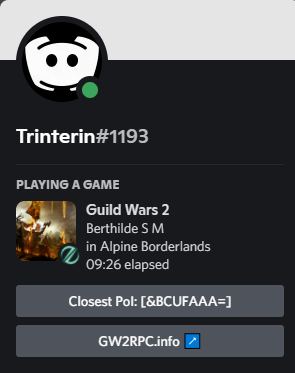 Simply run the gw2rpc.exe . It will start in your system tray. It needs to be running in background for Rich Presence to work.

In the config.ini in the program's directory, you can input your API key so that your status can display region (EU/NA) and your current guild tag.

To make starting Rich Presence easier, there is an .exe called launch_gw2_with_rpc.exe included in the download. This script launches both GW2 and the RPC addon. For it to work, it needs to be present in GW2FOLDER\addons\gw2rpc . You may then replace your normal GW2 shortcut with it for ease of launching.

You can also put a shortcut to gw2rpc.exe into your autorun so that it runs automatically on Windows boot.

Q: Can I get banned for this?

A: No, it doesn't interact with the game in any way - it utilizes the Mumble API to get the necessary data.

Q: What API permissions are required for the API key?

A: Currently characters, builds, and account are neccesary. In the future more may be added for more features.

Q: How can i use command line arguments with launch_gw2_With_rpc.exe?

A: Via a file called Settings.json. See the wiki page for more info.

Q: Can I use multiple API keys if I have many accounts?

A: You can use multiple API keys by separating them via comma in config.ini. No restart needed when switching accounts. They are only necessary to get your guild and region (EU/NA) and are optional.

Q: Can I disable Points of Interest display?

A: There are options in config.ini for disabling it either completely or in WvW

A: Yes, repository is available here

Q: How do I set up multiboxing?

A: Use the -mumble config parameter for GW2. This can also easily be set up in GW2Launcher.

Q: How do I set up the raid announcer?

A: Create a Discord webhook for your channel and enter the URL in the config.ini after 'webhooks = '. Several webhooks can be specified by separating them with a comma. Make sure that AnnounceRaids is set to true in the config.

Q: How do I disable a set up Raid announcer?

A: Right click the GW2RPC tray icon and click on "Announce Raids:" to toggle it on and off. This option is only available if a webhook is configured.